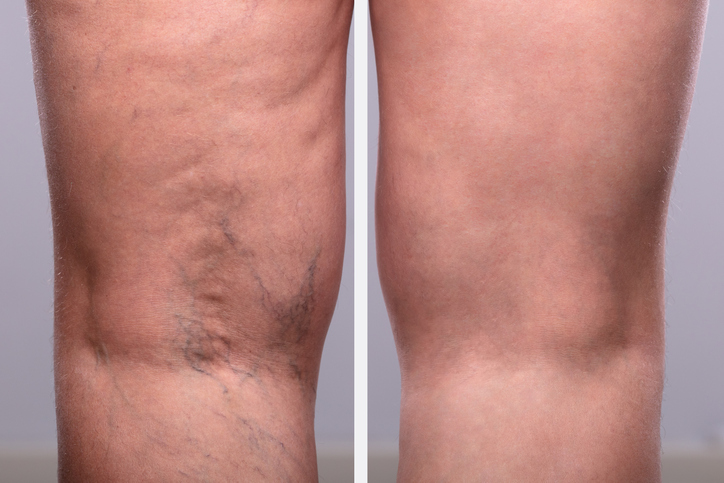 Spider veins are small, dilated blood veins that appear at the surface of the skin. They are often red, blue, or purple and are named so because of the shape of the discoloration that appears on the body. Sometimes they are a sign of a larger medical condition called venous insufficiency, but more often than not they are harmless.  People often mistake varicose veins for spider veins. Varicose veins are larger and often bulge out from the skin. While they are both part of the same system. The treatment of them varies and oftentimes varicose veins require more invasive treatments that covered by insurance. Treatment of spider veins is considered cosmetic.

Spider veins can be unsightly often keeping people from wearing shorts, skirts, or dresses as they most often appear on the legs. They can also appear in other areas of the body such as the face, abdomen, and ankles.

The good news is that spider veins can be treated. BodyBrite offers two types of treatment for spider veins:
Sclerotherapy and intermittent pulse light therapy (IPL).

Sclerotherapy is when a sclerosing agent, such as Asclera, is injected into the veins with a tiny needle causing scarring of the vein. When the vein is scarred it shrinks in size and collapses. It can take up to 6 weeks before the effects of the agent takes effect.  Typically 2 to 3 sessions of sclerotherapy are required.  Here is an example of a sclerotherapy session performed by our in house physician:

IPL uses light to destroy the pigment of the veins without harming the surrounding tissues. They work primarily on small, red spider veins due to the nature of the pigmentation. This method of treatment works best on the small red capillaries often seen on the face. Multiple sessions are required to be effective.

Both treatments are simple and effective in reducing or eliminating spider veins. 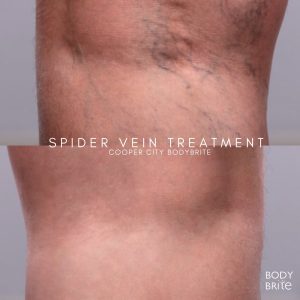 If you would like more information on spider vein treatment call us at 954-758-9292 or click the link  to schedule a free consultation to find out which method is right for you. BodyBrite Cooper City Med Spa proundly serves the surrounding areas of Cooper City, Weston, Davie, Pemroke Pines, Plantation, and Sunrise. We look forward to serving you.